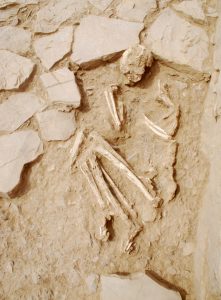 The reuse of tombs in Eastern Arabia, although a widely spread phenomenon from the Early Bronze Age to the late pre-Islamic period,  has been up until now little researched. This project provides a diachronic comprehensive view of the presence of reuse in the region with the aim of illuminating its social background. The research questions addressed are: Where and in which periods does reuse take place? Which types of reuse can be differentiated? Which parts of the society were involved in the actions associated with reuse? Of special interest is whether the studied incidents of reuse can be linked to collective memory and connected to this how collective memory can be identified in the material record.

Samad period tomb in the floor of the Umm an-Nar period Tomb 155 in Bat.