Al-Ayn is situated about 20 km to the east of Bat at the Wadi Al-Ayn. The group of tombs stands on the western side of the Wadi vis-à-vis the modern village of Al-Ayn at 630 m above sea level. The most striking landmark in the region is the 2000 m in height Jebel Mishd, which rises only 5 km to the north of Al-Ayn. De Cardi, Collier and Doe called attention to the site for the first time in the publication of their survey in the region of Amlah from the years 1974 and 1975. They describe 21 well preserved beehive tombs. From 2010 to 2014 archaeological investigations of the University of Tübingen under the direction of Conrad Schmidt were carried out. The main interest of this research project was to study the burial practices and architectural development of selected tombs in the necropolis of Al-Ayn. The Hafit period (3100–2700 BC) necropolis of Al-Ayn is mainly characterized by a row of 19 mostly well preserved tombs on a mountain ridge high above the wadi. Besides this main group of tombs  a further 12 more have been found, some of them in the direct vicinity, others further to the west on the slope. Most of them are in worse condition. Hafit tombs are above ground tombs built of stone with a beehive or truncated cone shape. They have only a single burial chamber. 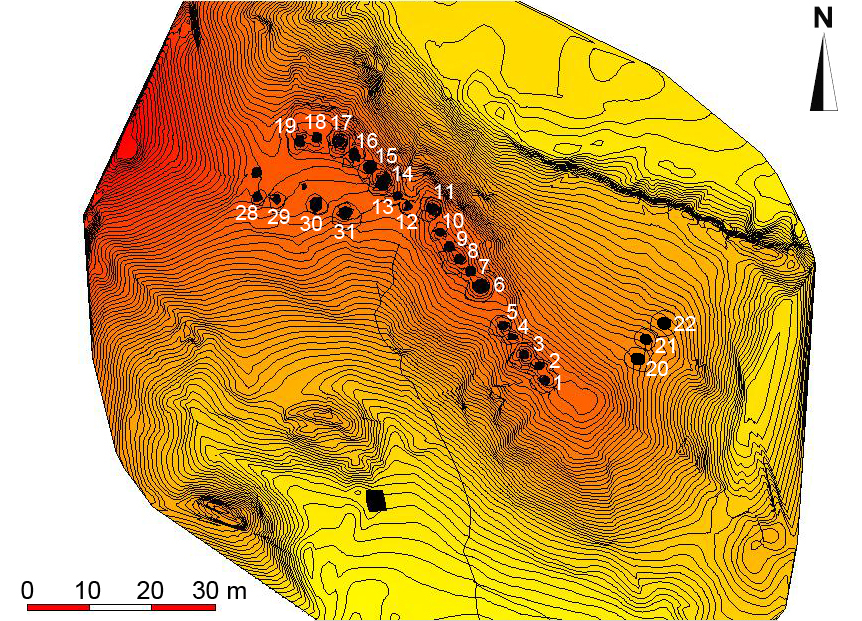 Elevation model from Al-Ayn with the 19 tombs in the main group in the centre. 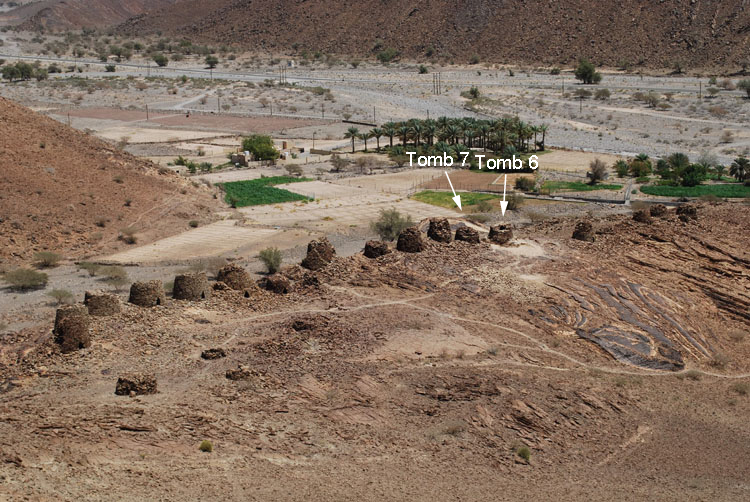 The necropolis of Al-Ayn with the investigated Tombs 6 and 7 marked.

Tomb 6 was archaeologically investigated in 2010. It is a typical beehive shaped tomb of the Hafit period (3100–2700 BC) with an external diameter of 5.75 m. The tomb was built in several steps directly on the bedrock. It is made of two ring walls directly touching each other. The wall protrudes to the interior so that the beginning of a false vault is created, which originally covered the tomb. The tomb is accessible via a small, triangular entrance. The burial chamber of Tomb 6, which has a diameter of 2.20 m, was filled with 40 cm of accumulation at the beginning of the excavations. The only find from the burial chamber is an 8.6 cm long copper needle with rectangular shaft that was found lying directly on the bedrock. During the excavations of the cone of debris outside the tomb, a Jemdet Nasr pottery sherd was found close to the entrance. Jemdet Nasr pottery was imported during the homonymous time period from southern Mesopotamia to Eastern Arabia and has repeatedly been found in Hafit tomb.

Tomb 6 before the excavations (left) and the so-called Jemdet Nasr pottery from the entrance (right).

Tomb 7 was archaeologically investigated in 2011, and is located to the northwest of Tomb 6. In contrast to Tomb 6, the well-preserved Tomb 7 only features one wall. It has a diameter of 3.90 m and is preserved to a maximum height of 2.77 m. The triangular shaped entrance of the tomb is orientated to the south. Within the entrance part of the original blocking material made of large, carefully laid stones was preserved. At the north-eastern part of the external wall there is a spot where the stones are out of order, probably the results of a robbers’ pit or a later entrance to the tomb. The fill of the burial chamber of Tomb 7 reached 50 cm at the beginning of the excavations. The pottery found within dates to the Iron Age in the 1st millennium BC. In addition, a sea shell, an open ring made of copper sheet with two rounded ends, a fragment of an undecorated copper sheet and stone beads of different shapes were recovered. The finds clearly indicate that the tomb was reused for burials several thousand years after its initial construction. 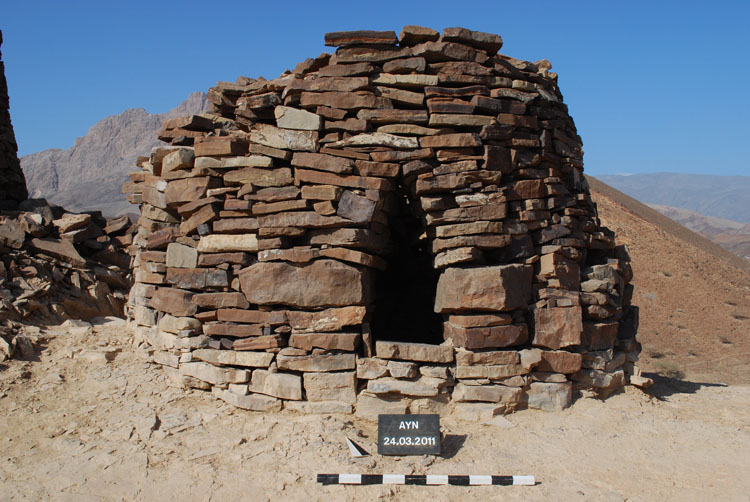 Tomb 7 after the excavations.