The site of Bat is located in the Az-Zahira governorate to the south of the Al-Hajar Mountains, about 25 km to the east of the modern town of Ibri. Bat is one of the most important sites of the Early Bronze Age in the 3rd millennium BC in Oman and is, together with Al-Khutum and Al-Ayn, a UNESCO World Heritage site. Besides a necropolis with several hundred tombs, eight monumental stone buildings, so-called towers, are documented. The first excavations at Bat were conducted by a Danish Team in 1972 under the direction of Karen Frifelt. Frifelt investigated several tombs in the necropolis as well as three of the monumental stone towers (Tower 1145, Tower 1146 and Tower 1147). On a slope to the north of Tower 1145 she uncovered some badly preserved remains of domestic architecture. After a longer interruption archaeological research at Bat resumed in the 2000s. Between 2004 and 2008 an archaeological research and restoration project from the German Mining Museum Bochum under the direction of Gerd Weisgerber was carried out. In the course of this project, several tombs in the necropolis were excavated and some of them rebuilt. From 2007 to 2015 several towers at Bat were investigated, initially by an American team lead by Gregory Possehl, which later became a Japanese-American collaboration under the direction of Christopher Thornton, Charlotte Cable and Yasuhisa Kondo. Between 2010 and 2015 the University of Tübingen under the direction of Conrad Schmidt excavated two tombs with associated burial pits in the necropolis of Bat as well as Building II to the south of the necropolis. The main aim of the research project from the University of Tübingen in Bat was to investigate the causes of the socio-economic changes of the 3rd millennium BC in Eastern Arabia with the example of Bat. For this purpose, the burial practices and the architectural history of selected tombs and burial pits within the necropolis of Bat, as well as the functional and architectural development of one monumental building, were studied.

The necropolis of Bat consists of several hundred Hafit (3100–2700 BC) and Umm an-Nar (2700–2000 BC) tombs. In its centre there is an ensemble of three well preserved Umm an-Nar tombs with the numbers 154, 155 and 156. Tomb 155 has an external diameter of 6.50 m and is made up of two burial chambers that are separated from each other by an internal wall. This inner wall only extends by two-thirds into the room so that both burial chambers are accessible from a common entrance. The external façade of the tomb was originally composed of carefully worked white stones of which, at the time of the excavations in the years 2012 and 2013, only six examples were preserved. The other parts of the external wall consist of brown ashlars. The tomb was preserved to a maximum height of 0.80 m. Its fill was made up collapsed stones from the walls as well as fine, wind-blown aeolian silt deposits, with the lowest level comprising of a floor made of stone slabs. The majority of finds from this tomb rested on this stone floor. They include pottery with black geometric decoration on a red background, chlorite vessels and beads that date to the Umm an-Nar period. Remarkable is a 7.6 cm long, biconical carnelian bead. It is clearly an import from the Indus region. Human bones were found, with one exception, only scattered and highly fragmented. In the southern part of the tomb along the internal wall a flat pit with a complete skeleton in a flexed position was found. As the grave goods from this burial include several arrow heads made of iron, this permits dating the burial to the Samad period (300 BC – AD 300).

Carnelian bead from Tomb 155 – an import from the Indus region.

The Umm an-Nar period (2700–2000 BC) Tomb 156, excavated between 2010 and 2011, is located to the northwest of Tomb 155. It has an external diameter of 8.10 m and features two semi-circular chambers, Room A and Room B, that are separated from each other by an internal wall. Both chambers have a separate entrance. Room A, the eastern burial chamber, measures 5.40 m in length and 2.30 in width. Room B has similar dimensions. The fill of the rooms reached a maximum of 2.10 m in height at the beginning of the excavations and consisted of stones collapsed from the walls as well as wind-brown aeolian silt. It ends on a stone paved floor, which was however only partly preserved. Within the fill, several finds of different dates were scattered. Besides a few finds that belong to the Umm an-Nar period, which were found especially close to the floor,  beads and arrow heads from the Wadi Suq period (2000–1600 BC) were found, along with Iron Age pottery and chlorite vessels (1200–600 BC), several arrow heads made of iron that belong to the Samad period (300 BC – AD 300), as well as only a few decades old Bedouin jewellery. These finds attest a complex use history of the tomb with several phases of reuse over the millennia [project reuse of tombs]. 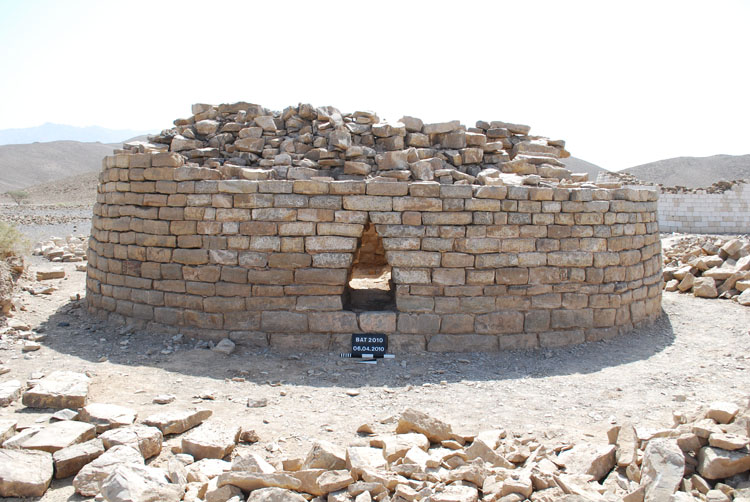 Tomb 156 from the east with the entrance into one of the two burial chambers.

Burial Pit Inst. 0006 is an oval, gently sloping pit located to the southwest of the entrance to Tomb 154. About two-thirds of the pit was already excavated between 2007 and 2008 by the German Mining Museum Bochum under the direction of Gerd Weisgerber, the remaining part in 2010 by the University of Tübingen. The pit dating to the Umm an-Nar period (2700–2000 BC) was cut into the natural gravel. It was filled with fine, brown earth, in which many, oftentimes highly fragmented human bones, complete pottery vessels and jewellery were found. The human bones were in the majority not in anatomical order which demonstrated that the deceased were at first buried at a different place and only later transferred to the pit. It is assumed that the material from the Burial Pit Inst. 0006 is the inventory of one of the neighbouring tombs, most likely that of Tomb 154. This probably happened in order to free space for new burials within the tomb. The pottery from the burial pit is mainly typical for the Umm an-Nar period with geometric decoration painted in black. There are however also fragments of grey, incised pottery that was imported from eastern Iran or western Pakistan. The jewellery from the burial pit is comprised mainly of beads, amongst others made of lapis lazuli or carnelian. Lapis lazuli came from present day Afghanistan to Oman, carnelian most likely from Gujarat in present day India. Hence, the finds from the Burial Pit Inst. 0006 demonstrate the far-reaching connections from Oman to its neighbouring countries in the 3rd millennium BC. 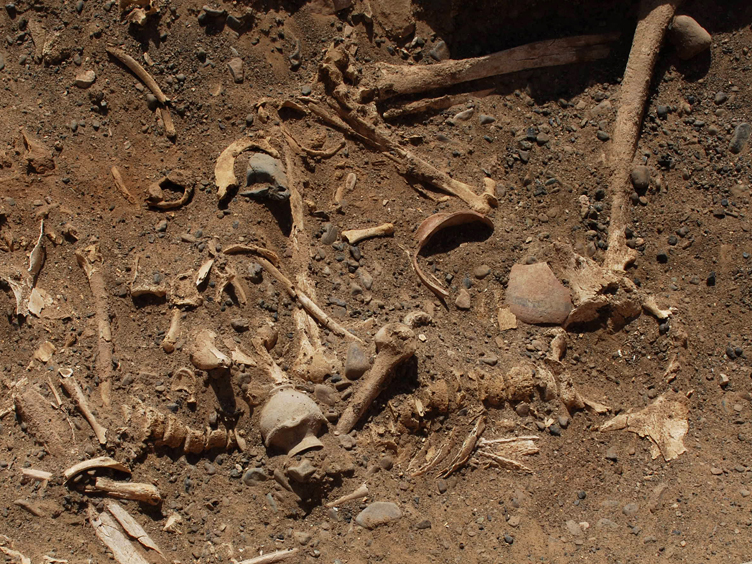 Part of a human skeleton and a complete pottery vessel from Burial Pit Inst. 0006.

Burial Pit. Inst. 0025, investigated in 2012, is located about 80 cm to the east of the eastern entrance of Tomb 156. It is approximately oval and has a maximum north-south extent of 3.70 m and a maximum east-west extent of 3.20 m. It is cut into the natural black gravel to a depth of 60 cm. The fill of the pit consists of fine, brown earth. Like Burial Pit Inst. 0006, numerous, oftentimes highly fragmented human bones, pottery vessels and jewellery were found. The pottery is in the majority typical Umm an-Nar pottery with black decoration on a red background. There is also a complete vessel of grey, incised pottery imported from eastern Iran or western Pakistan. Among the jewellery, a flat, diamond-shaped bead made of silver sheet, which demonstrates links to the Aegean, as well as two carnelian beads with bleached circle decoration from the Indus region must be highlighted. By far the most remarkably find from Burial Pit Inst. 0025 is a cylinder seal made of chlorite. It probably depicts a schematic representation of two animals in front of a plough. As for the pit Inst. 0006, it can be assumed that the material from Burial Pit Inst. 0025 is the relocated grave goods from a neighbouring tomb including the human remains that were transferred to the pit in order to free space within the tomb itself for new burials.

Building II is located to the south of the necropolis of Bat. Excavations took place here in 2011 and from 2013 to 2015 after the American team, under the direction of Gregory Possehl, had already conducted initial investigations in 2007. The external wall of Building II forms an irregular oval with a diameter of about 30 m. It is built of unworked stones and preserved to a height of about 1.50 m. Charcoal from the foundation trench of the wall dates to the end of the Hafit or beginning of the Umm an-Nar period around 2800–2700 BC. Outside of Building II, several circumferential ditches were detected that existed sequentially. They are at most 6 m wide and more than 3 m deep and filled with hard, brown earth that accumulated in horizontal layers. The function of these ditches is still unknown. The first use of Building II ends with a 45–50 cm thick layer of homogeneous brown earth that marks a hiatus. Several pits are cut into this layer within and the outside of the building. That happened most likely during the Umm an-Nar period as well. The pits were filled with stones and yielded many finds including pottery sherds, copper objects, grinding stone fragments, stone tools, shells and beads. 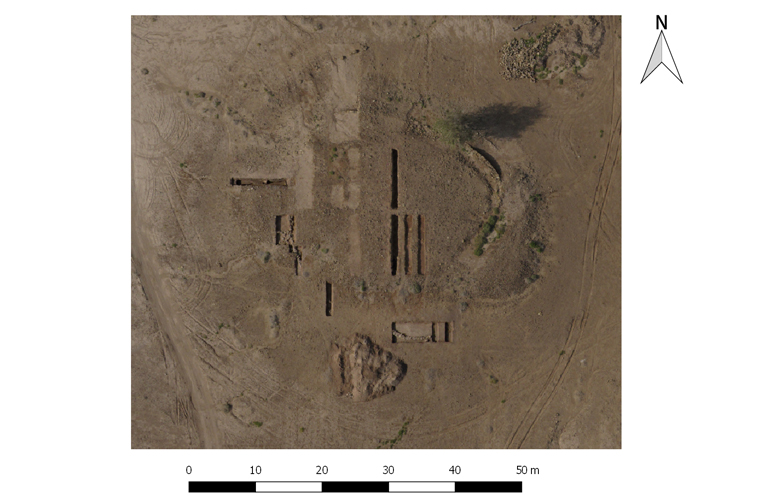 In 2014 geophysical prospections were carried out in the necropolis of Bat by the company GGH Solutions with a magnetometer, as well as in selected areas with a ground-penetrating radar. On the basis of these prospections 14 additional probable burial pits were identified within the surroundings of the tombs in the necropolis of Bat. The results also show that burial pits only exists in association with Umm an-Nar period (2700–2000 BC) tombs and never with Hafit period (3100–2700 BC) tombs. Generally, only one pit belongs to one tomb, only in one case were two pits detected. These studies provide important information on the overall picture of the burial practices in the necropolis of Bat. 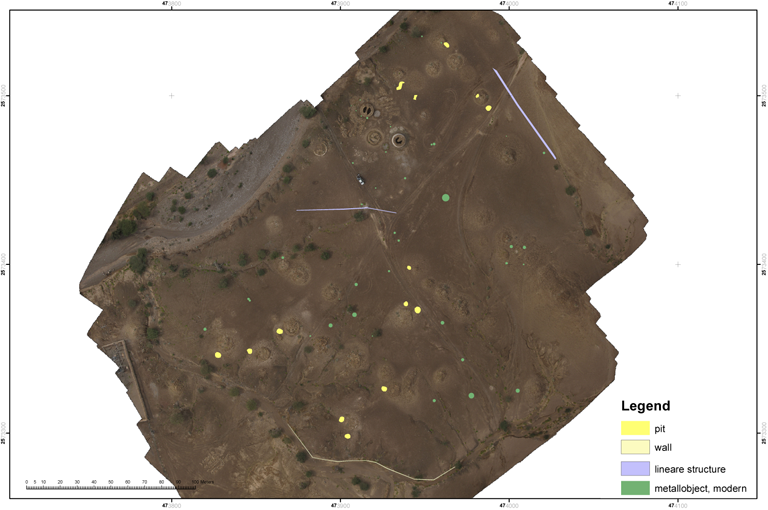 Orthophoto photograph and results of the geophysical prospection in the necropolis of Bat (Stefan Giese und Christian Hübner, GGH Solutions).